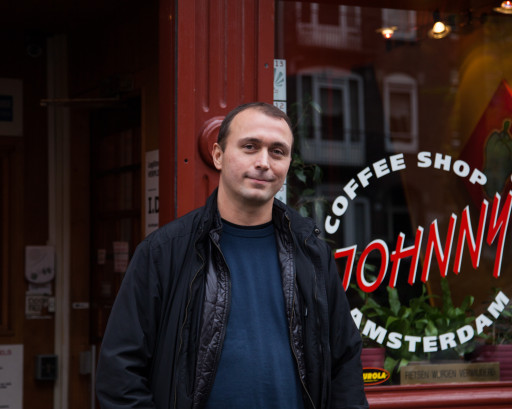 Johnny, the owner of the coffeeshop that bears his name, started his career peddling fresh vegetables on markets around the city.  Until he decided one day to go into business for himself. Fast forward twenty-odd years and this place still exists. The interior is small but tidy and organised and a faint, sweet smell lingers in the air. It has a separate, closed off smoking area, installed to comply with the latest regulations on smoking in public places. Johnny found the location at Elandsgracht 3 through the same grapevine Marvin Gaye used to sing about. Once he obtained the necessary permits, Johnny opened its doors and after a short warm up period, the business started doing well. Celebrities like the Ramones and several American movie actors have walked through the doors here, looking for a Dutch treat, shall we say. The closure of numerous coffeeshops around Amsterdam obviously did not hurt Johnny and despite ever stricter regulations, this is one coffeeshop that isn’t about to roll over and play dead.