Hollywood Mark Tattoo was established on the Elandsgracht in 2007, but owner Mark had by then already lived in The Netherlands for fifteen years. The discussion of fate vs coincidence is not one to be had here, but one cannot escape the notion Mark was destined to do what he does, and to end up right here. Mark was spotted in Los Angeles in the 1990s by Dutch tattoo legend Henk Schiffmacher, who was suitably impressed by the young artist’s work. So much so that he extended an invitation to join him as an apprentice. Mark jumped at the opportunity and quickly made a name for himself, soaking up the knowledge and skills that are now building and expanding Mark’s own reputation. Moreover, it is in Amsterdam that he met the love of his life. Mark runs a small yet very dedicated business, where no work of art leaves the shop without his own seal of approval. He has tattooed some of the biggest names in both Dutch and worldwide showbusiness, but is very discreet about all of that. He much prefers his work and that of his fellow tattoo artist, speak for themselves. Whether you are looking to get inked, or just want to see where vision and drive can get you, if you are looking for undiluted inspiration, come visit this place. 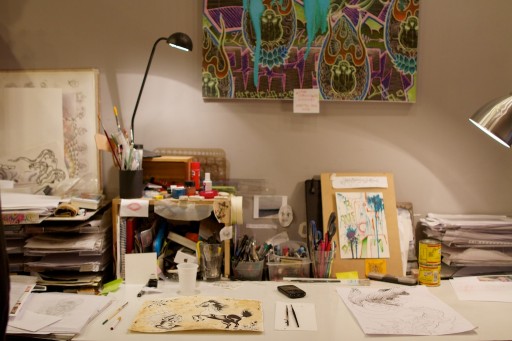