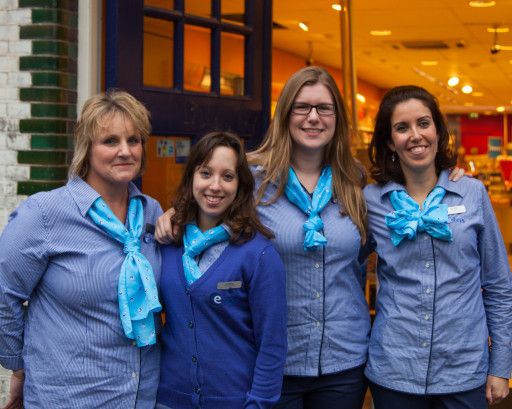 This  garage-turned-pharmacy was a welcome addition to the gracht when it got here in 2006 and has proven one of those places that people like coming back to. You listen to general manager Conny and it all sounds so straightforward: it is all about product knowledge and honesty. Her personnel is supposed to know what they’re talking about if they are to offer reliable advice to their customers. The fact that they get to try all new products is not only a great way of achieving this, the staff take great pleasure in it, too. Their modest yet professional attitudes make Etos a great place to wander around in. Browse at your leisure without feeling accosted by pushy people looking for a quick sale. The Etos employees had rather they gave you good advice without selling you something then making you buy something that does not really benefit you. Result: a steadily growing number of regulars as well as new customers. Common sense is good business. 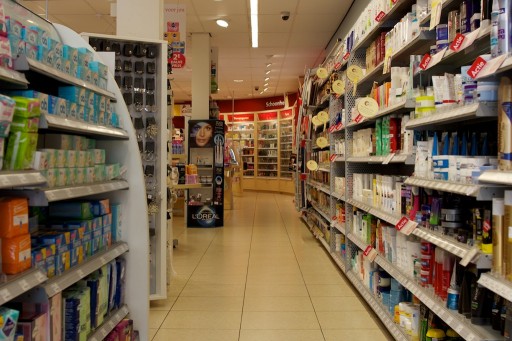 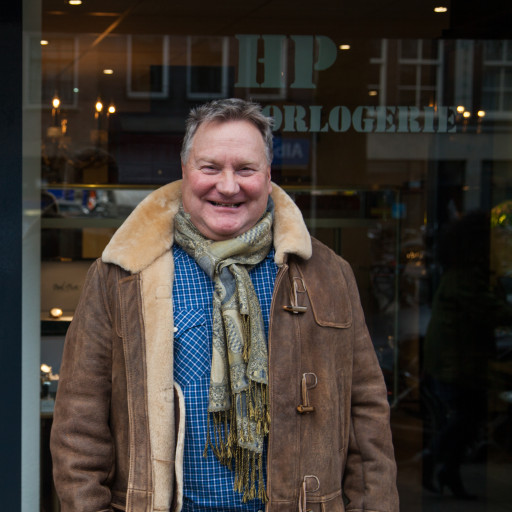 HP Horlogerie is one of the true jewels on the Elandsgracht. Especially for the connoisseurs and fans of beautiful watches, who know what they’re after and are aware of how hard to find some watches can be. Leave it to founder and owner Henk to find such rarities. Back in 1990, having already spent several years plying his trade selling his goods at markets right here in Amsterdam, Henk decided to set up a shop in antique furniture. As the space at Elandsgracht 38 became available, Henk didn’t need to think twice. His business did well, but even so, after the better part of a decade, Henk performed an experiment by putting a rare and beautiful watch in the display window. It sold within days. He repeated this several times and then decided to focus on watches exclusively. Another decade on and his reputation – and therefore his business- is flourishing. He is a welcome presence on both internet for a and watch fairs around Europe. His excellent service and range of watches make him a favourite among many returning customers. The shop window and the shop itself are a sight to behold. Come witness for yourself, whether you can barely afford the small dial on a Rolex, or intend to purchase a Breitling from the early 20th century, it never hurts to look. 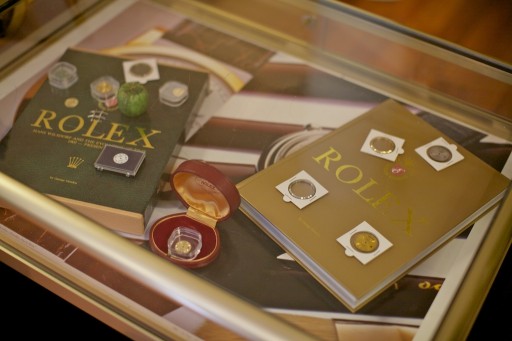 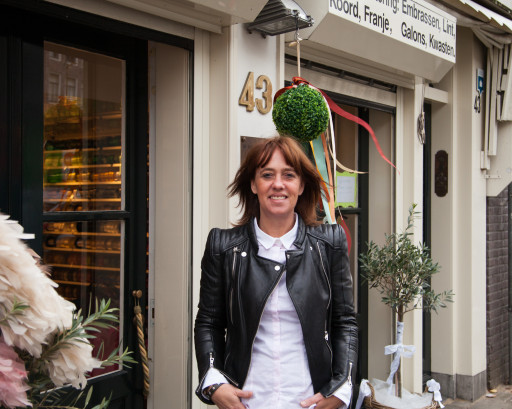 This blink-and-you’ll-miss-it shop has a rather contrasting reputation. The specialist bar none in decorative elements ranging from borders and trimmings,  through to ropes and laces has become a bit of a legend since it opened for business in 1938. Among its regulars, van de Kerkhof proudly counts the National Ballet Palace het Loo and the Dutch Opera Foundation. How’s that for some casual name dropping? The grandfather of current owner Manuelle originally established the business on the Wolvenstraat, on the other side of the bridge across the Prinsengracht.  The shop only moved to the Elandsgracht in 2010 and was in time handed down to the son, who in time handed the shop down to Manuella, who continues expanding the shop’s service and reputation. Step inside this place and you do actually feel as if you stepped into a different dimension. Such warmth and lovely colours meet your senses here that you walk around in amazement for a while. 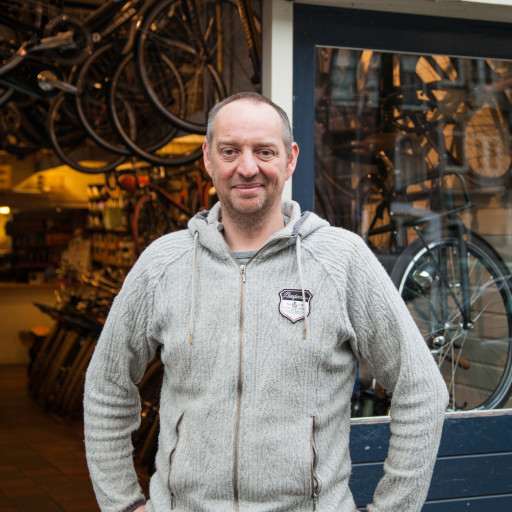 Owner Stef Comman is a third generation bicycle repairman. Both his grandfather and his father were in the business before him. As a teenager, Stef never really fancied a career fixing bikes. Until he started lending a hand in the shop on busy days.  His dad, not about to have his own son as his apprentice, sent Stef to some of the biggest names in the business to learn the trade. Once he was qualified, Stef went to work for his dad, and now, nearly twenty years on, Stef runs the place, with a passion and interest he’d not imagined possible as a young lad. He welcomes his customers with a joke and friendly banter, but as everyone who steps into his shop soon finds out, the advice he offers is never less than sound, honest and professional. Talk to him for more than five minutes and it becomes clear this man loves what he does. And as he witnessed the biggest brands in the business starting to use inferior materials on their bikes in a desparate attempt to survive the economic downturn, he grew frustrated but also determined not to go along with that. So he started a brand in his own name: superior materials, amazing design, and best of all: manufactured locally, Stef Comman has virtually guaranteed his name and survival. He will not bike gently into the night, that much is certain. 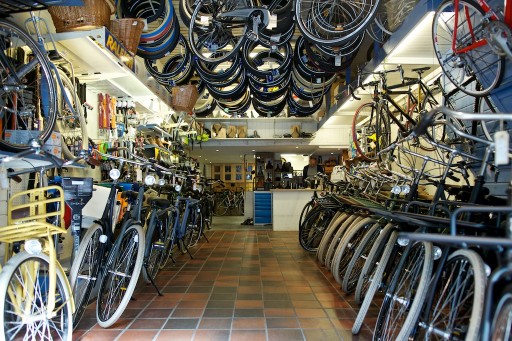 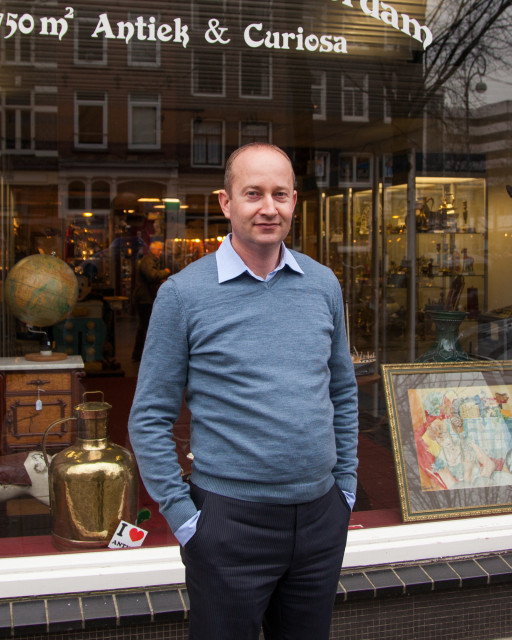 Antique center Amsterdam, formerly known as ‘the Looier’ in an old garage. The space is enormous though it is packed to the rafters with antiques,  knickknacks, collectible items and rarities. Display cabinets guide you through a maze stalls and more displays, each owned by another dealer, collector or enthusiast. The center underwent a transformation “to dust it off and bring it into the 21st century”, as the owner put it. Arnout and his wife Emrys ter Haak took over the business and decided to  overhaul the place, but keep it accessible to tourists, students and serious art lovers and collectors alike. Whether you come in looking to spend 5000 Euro or 5, there’s something here for everyone. The vast collection of items ranges from the bizarre to the funny and from the delicate to the breathtakingly beautiful. It is absolutely fascinating walking through this place and will make you wonder why you didn’t comer here sooner – or more often. 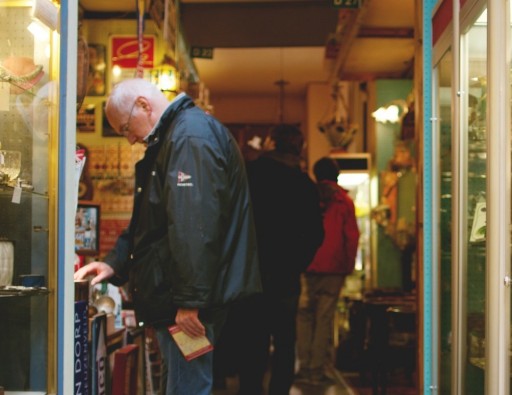 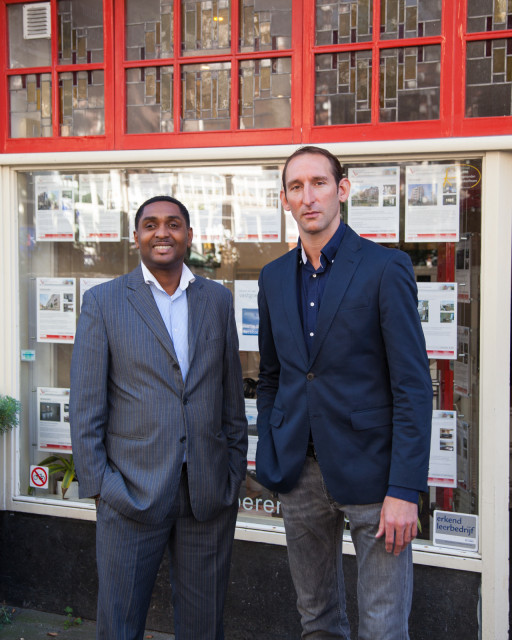 Linger real estate is a quiet presence on the Elandsgracht. Its modest store window and shopfront belie the ambitions and aspirations of its owners and employees. Now that Linger have a second office in the southeastern part of the city and five full time employees, they cover the whole of Amsterdam. Whereas other realtors have only recently – forced by dire economic circumstances – started paying closer attention to the needs and wants of their clients and offer more personalised service, Linger have embraced these elementary business principles since it first opened its doors. Linger have managed to spot opportunities in less fortunate times. It is precisely because of this combination of  business savvy and optimism that Linger continues to welcome more and more clients, mostly via word of mouth among expats and people with limited spending power. 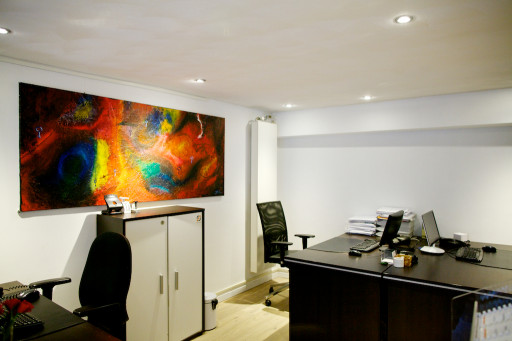 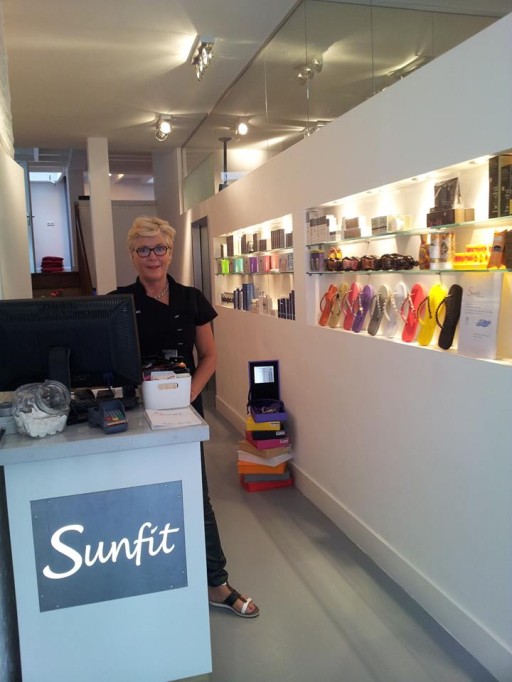 Unlike some of the tanning salon’s most avid visitors, this place is rather inconspicuous and that works just fine for owner Coby. For a solid 25 years, this tanning place, has built its reputation, slowly expanding its services over the years, becoming more and more of a full blown beauty salon. The salon moved to a great new place on nr. 101, where it uses every square centimeter for its impressive array of sunbeds, wood panelled cabins and reclining massage chairs. The place offers handy frequent visitor cards at special rates. Not that it really needs to lure customers in. Once you’ve been once, odds are considerable that you will be back for more. 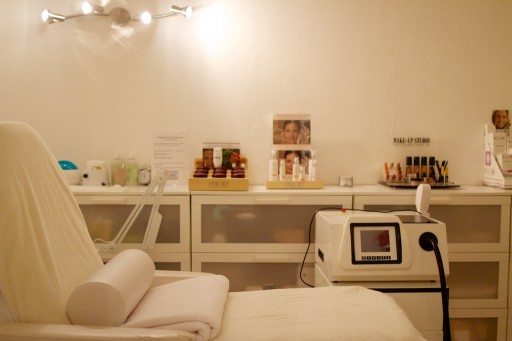 This bio-butcher’s has barely reached middle age, a respectable fourty six years old in 2012, but in a bustling city, specialising in what is still a niche market, that is quite an achievement. The bio-market may still be niche, but owner Niek does see the demand for biological meat grow. Niek inherited the artisanal approach to this profession from his dad Siem, the name that still adorns the front of the shop.  Siem was the co-founder of the ISC ( International Free range meat Control organisation). The traditional approach and work methods is also reflected in the pleasant interior. It is of course, spotless, but it has a hint of authenticity about it, with decorated woodwork, and some stained glass details. The customer truly is king here, as Niek says. Interaction with his customers, and their satisfaction with his productts, is all inherentin Niek’s dedication to his profession. And there is not a  recession or an out-of -commission bridge that will change that. 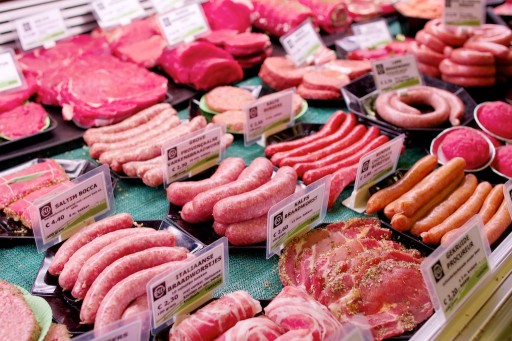 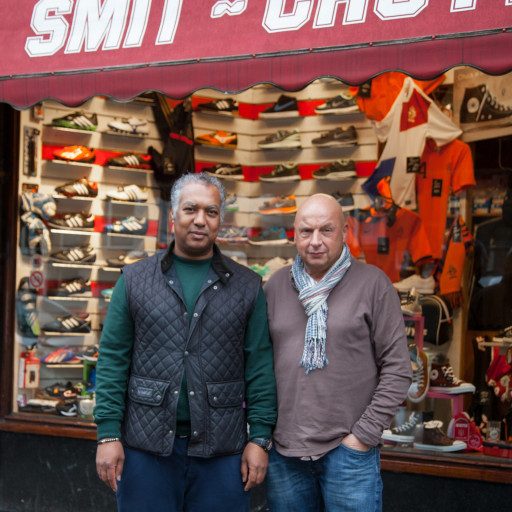 Smit-Cruyff is the sportswear store of Amsterdam. First of all there is the obvious connection to one of the world’s legends of football (Johan Cruyff’s brother was a co-founder). This store opened its doors in 1940 and, as a result, has beaten a world war, recessions, depressions, you name it, only to come out victorious. What’s in a name, as a famous bard once wrote. Besides this, or maybe because of its spreading reputation, global sports brands like Puma and Nike were launched in The Netherlands via this very store. Yes, you read that right. The two current owners, Guno Reingoud and Robbie van der Straeten are now both in their fifties, and took over the business in 1998. These guys know every nook and cranny of the store, since they were working here  as assistants when they were teens, admiring the action photo’s and newspaper clippings that decorate the wall when they were teenagers. Needless to say this store holds a special place in their hearts, as does the gracht they are located on. For many Amsterdammers, Elandsgracht is synonymous with Smit-Cruyff. Here is to the next 70 years. 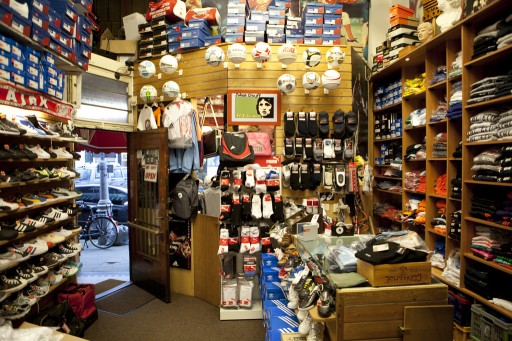 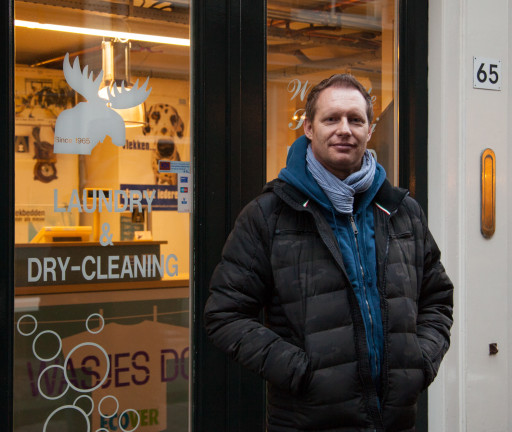 Sinds 1965, this quiet little business has made quite a name for itself. Over the years it has shown something that is not as common in small business anymore as one would expect or hope: it is reliable. Plain and simple. It cleans your clothes, carpets or even leather and suede items and will even collect and deliver. It has moved to Hazenstraat 65 early in 2012, but considering its track record and, well, the name, we still consider it part of the Elandsgracht. The laundromat’s interior may occasionally look like fifteen closets full of clothes exploded, there is definitely a method to the apparent madness. The owner, Coert, works almost round the clock and does it with a smile and a kind word for everyone who walks into his place. His trusted two assistants are equally dependable and are always in for a quick joke or anecdote about the neighbourhood. Being made to feel like a regular and walking home with a mountain of fresh clean clothes never fails to put a smile on your face. 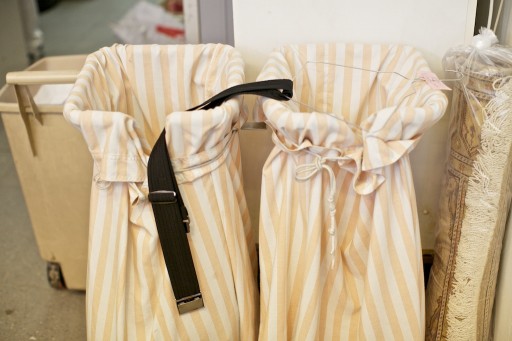